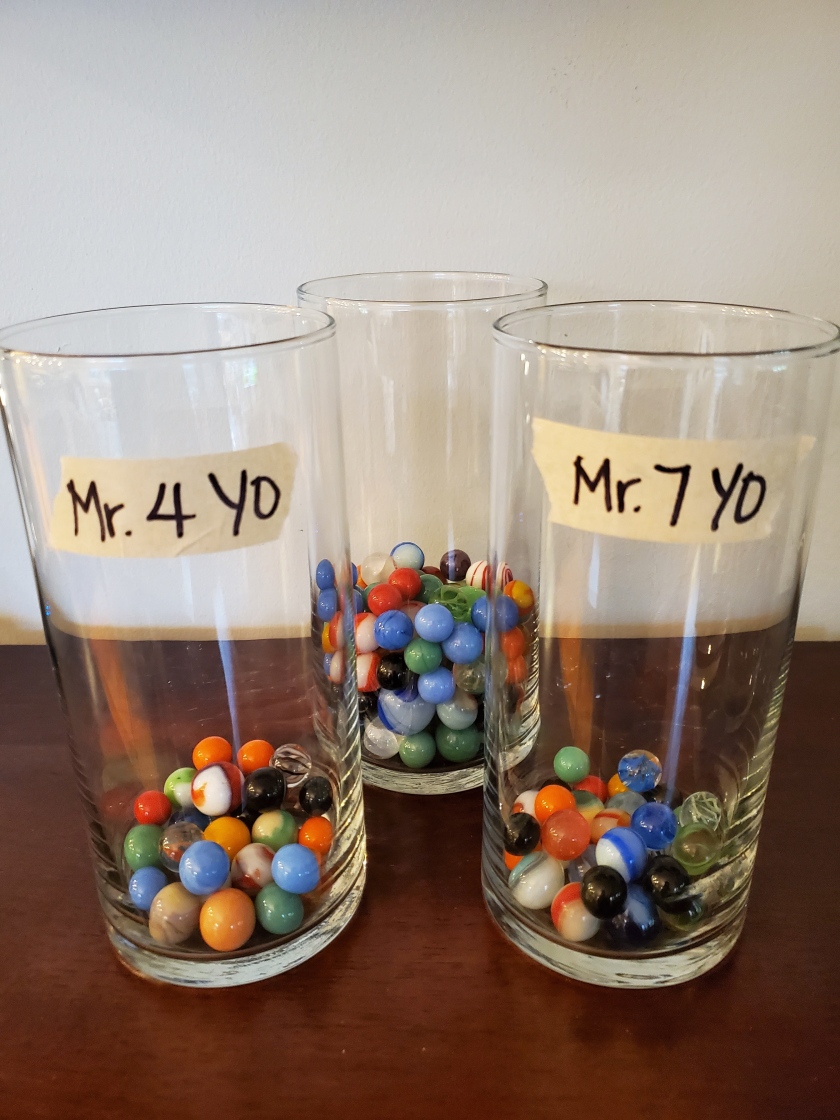 Mr. 6 year old became Mr. 7 year old this week! I can’t believe our once tiny human who surprised us by arriving over five weeks early is now seven years old. My husband pointed out that Mr. 7 year old is now less than a decade away from driving. AHH!

In our house, aging up unlocks new responsibilities. I was a big fan of the fourth birthday because that’s when we said that the kids had to start wiping their own bums. We’d assist afterward, as needed, but serious training on wiping starts at four. I never wanted that job! Four years was enough.

With Mr. 7 year old’s birthday, we have started a new reward system for both kids. We’ve had reward systems in the past, like stickers for trying new foods or using the potty. I’m also not above paying my children to read. The going rate was a quarter per book.

Our newest reward system involves awarding the boys marbles for good behavior. Each marble is worth five minutes of screen time, a treasured reward. What I love about this system is that we can use the same system for every habit we want the boys to build, like brushing teeth, reading a book, or being kind without prompting. Every good behavior earns them a marble.

I’m hopeful that the system will stick. I think it will because the system has us looking for good behavior. We want the kids to be successful, so my husband and I are always on the lookout for behavior we want repeated. By recognizing good behavior (using the screen time currency the kids love), then we’re giving positive reinforcement to the establishment of good habits. I liken it to the gratitude movement that suggests taking time each day to recognize what you’re grateful for will bring you more joy. By recognizing the good behavior we want to see, the boys will continue making good choices.

However, we’ve made it clear to the boys that what can be given can be taken away. The boys earned a few marbles last night as they cleared the table without asking and got ready for bed largely on their own. They each lost a marble though when they decided to get out of bed and horseplay after bedtime.

We’ve just introduced this system, so I’ll have to report back on our progress after a few weeks. So far, everyone in the family has jumped onboard. The boys are seeking opportunities to earn more screen time, and my husband and I are being generous passing out marbles as we start.

The real reason I want this system to stick is simple though. I amuse easily. It’s too funny picturing my husband or me in the middle of the grocery store or some other public venue telling the kids, “That’s it! You’ve lost your marbles!”